Recaps of Tournaments the club has ran.

Did you miss it? 47 players from the states of Ohio, Indiana and Kentucky spent Saturday July 16th contesting the Cincy Tornado in Wyoming Ohio. A new playing site in […]

Justin Storn repeats as the city champion! Our 2019 Cincinnati City Championship was a completed with a playoff to decide who would get the trophy and title of city champion. […] 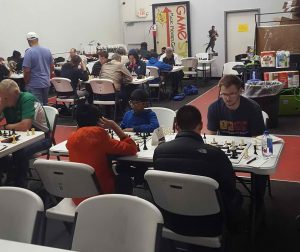 The return of the Cincinnati one-day tornado tourneys has been a huge success! In the first one in March, we had 15 players in the U 1600 and 17 players […]

Grand Opening at Deer Park a Huge Success The club celebrated our new home in Deer Park on January 17th, 2014 with a Grand Opening party. We had drinks, food, […]